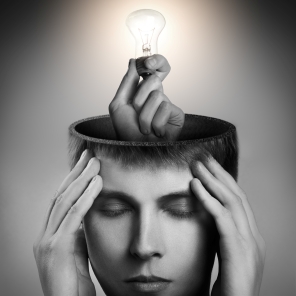 At the Australian Psychological Type Conference (AusAPT) this month, we were fortunate to have some fantastic speakers from Australia, the US, NZ and the UK. Two of the speakers, Jane Kise and Ann Holm, presented an engaging and theatrical demonstration of their Saboteurs, which are self-driven thoughts that hold us back. This presentation was based on the work of Shirzad Chamine, the author of the New York Times bestselling book ‘Positive Intelligence’ and designer of the Positive Intelligence assessments on Saboteurs.

“The Judge is the universal Saboteur that afflicts everyone. It is the one that beats you up repeatedly over mistakes or shortcomings, warns you obsessively about future risks, wakes you up in the middle of the night worrying, gets you fixated on what is wrong with others or your life, etc. Your Judge is your greatest internal enemy, activates your other top Saboteurs, causes you much of your stress and unhappiness, and reduces your effectiveness.”  Source: https://www.positiveintelligence.com/assessments/

I think we can all relate to the Judge saboteur and how it can hold us back from getting on track in our careers. You may refer to it as the internal critic or those negative voices in your head. The one’s that hold you back, cause you to slip up, worry or just bring unnecessary negativity into your life.  There are 9 Self Saboteurs in this tool: Stickler: Pleaser; Hyper-Vigilant; Restless; Controller; Avoider; Hyper-Achiever; Victim and Hyper-Rational.

If you are ready to increase your self-awareness, discover your top 3 Saboteurs and engage and strengthen your inner Sage to fight back then I would encourage you to invest the time to do the assessment and read the comprehensive report.

You may or may not be surprised with the results. I know for me, one was a bit of a shock. However, when I reflected on it, it made sense and I identified several situations where my saboteur has held me back in the past! You may discover some of the answers to why your career is not on track?

To complete this free assessment and read an insightful report on your saboteurs go to https://www.positiveintelligence.com/assessments/

“there is now considerable scientific evidence for the idea that cognitive or deep diversity – that is, diversity in how people feel, think, and act – has significant benefits for organizations” source  Tomas Chamorro-Premuzic

While there are many great interventions within organisations to increase awareness and drive change around social, gender and cultural diversity,  one area that seems to be neglected is cognitive diversity, which looks at the deeper psychological functions of each individual.

As a coach, I wonder why organisations only look at diversity at one level.  Maybe it is all too hard to factor in the time and effort or is the organisation lacking in expertise in People & Culture function within HR? Interestingly, there are really effective tools to help organisations understand the cognitive diversity of their employees.

One tool that has been around since the 1940’s, the Myers-Briggs Personality Type Indicator (MBTI), which defines and measure cognitive diversity around our four preferences for gathering information (Sensing Vs Intuition) and making decisions (Thinking Vs Feeling).  It stands to reason to achieve a good well-considered decision making you need to factor in all four of the preferences as shown in the Z model image below. Which is very hard for one person to do effectively! 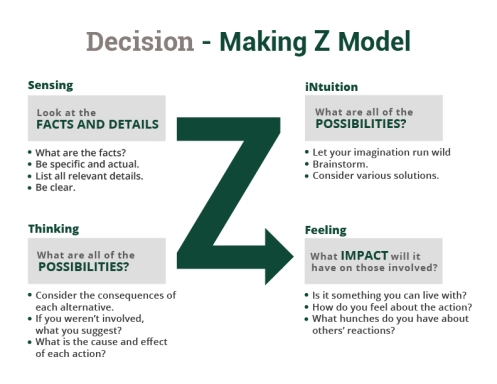 Yet within many organisational groups we see a lot of ‘group think’ – people who share the same cognitive style, which can at times be a positive thing for collaboration, but does not necessarily position the team for growth!  Particularly if those making the decisions have not developed their self-awareness and effectively used their non-preferred cognitive functions. For example, if a dominant decision-making style is ‘Thinking’, leveraging their logic, yet they fail to tap into their ‘Feeling’ preference and consider the needs of the people around them when making important decisions.

From a workplace culture perspective, given so much of the miscommunication, conflict, and stress can be caused by different cognitive styles, providing employees with an awareness of their preferences and those around them can only be a positive thing.

Rather than simply taking in information and making decisions leveraging their dominant cognitive functions, which provides one perspective only, they can start to gain an awareness and appreciation of the other preferences, all of which are equally as valid as their own. Steering away from the mentality of ‘I am right’ and ‘you are wrong’, that there are various equally valid diverse solutions. Yet in organisations where employees are so often under stress, this can be forgotten (even if it was once known).

Take a moment to reflect on your own cognitive style?  Then consider the dominant cognitive style of those in your management and leadership groups?  It may be time for your organisation to consider adding cognitive diversity to its mix of diversity initiatives and professional development. This training will also give leaders an awareness of a fantastic tool that will help them understand the preferences of their team, colleagues and clients too.

For organisations, leaders, and managers interested in learning more about cognitive diversity and training & development options to develop this please visit us at Diversitas or contact us to discuss your needs.

Kelly Magowan is a Career & Executive Coach, Leadership Development Facilitator, and runs MBTI® Training programs for organisations through Diversitas.   She has built a reputation as a thought leader in the careers space, regularly appearing on ABC Radio.

Cultural Chemistry is a wonderfully engaging and insightful book by Patti McCarthy who is an expert on the topic of culture. Patti has lived and worked across the globe and has assisted many an expat in her career. I have seen Patti speak and found her to be wonderfully passionate and knowledgeable on the subject of culture.

While having worked in a HR and Careers capacity with many an expat, I have found that there is always more we can learn about cultural engagement. Patti’s book is wonderfully rich in real life experiences with many tangible pieces of information that can make all our workplaces more harmonious.

It is also a valuable read for MBA students looking to work and or study abroad, as well as though who may even be finding some friction in their syndicate groups due to cultural differences.

As the title suggests, Cultural Chemistry is a terrific book for bridging cultural gaps which are ever present in our work and places of study.

To learn more about the book or purchase online visit the Cultural Chemistry site.

When my coaching clients come to me and say that they want to be a leader. I automatically start to explore the driver for this desire. What actually do they mean by ‘leader’? Is it power to make decision for others, or have authority over others? Is it a title (noun) or a change agent (an adjective) they seek? Or is it just a trend – to be successful you must be a leader?

In the exploration with my clients on this topic I also did some research on the term ‘leader’, ‘executive’ and ‘manager’, producing interesting results. There is no simple descriptor for each of these titles. Therein lies the challenge, or possibly the reason for the confusion. Whilst we speak of leaders do we mean their title/responsibility or do we mean the act of leading (adjective).

An Executive role is usually another term for a leadership role or a management role. Executives can be in several roles in an organisation and every organisation tends to have their own language on the hierarchy. Using names like Director, Associates, Senior… etc.

No wonder, the constant demand for new leaders is not satisfied as we are unclear on what we want these ‘leaders’ to do.

If you are seeking a leadership role I suggest that you qualify what you want to achieve as the leader/manager/executive and make sure it agrees with the hiring organisation’s definition before embarking on the role. That way you will be defining your role consistent with the expectations of the organisation.

For those looking to transition into a leadership or executive role, Diversitas offer a comprehensive worksheet to help you define your personal style and create your strategy.

Author:
Sue Daniels is a Director of a Career Consulting business and has extensive experience of designing innovative career development programs in the university sector at Melbourne Business School and for the London Business School.  Sue has served seven years on a not for profit board and has a background in international investment management. 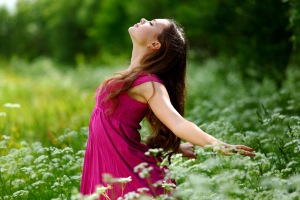 If you are at the stage where you are looking to re-assess your life and or career, this is a wonderful post on LinkedIn, The 5 Biggest Regrets People Have Before They Die

While the title sounds somewhat morbid, it is actually a poignant article based on the experience of someone caring for terminally ill people.  They recount the regrets that people have about various aspects of their lives – be it relationships, love, leisure, work……

Interestingly, it also looks at all those things that hold people back from doing what they really wanted to be doing with their lives– which is often sadly the expectations and opinions of others!

The article serves to force us to reflect on what is truly important to us, and how we want to live our lives.

How do you truly want to live 2017 and beyond? Is it time to chart your own course? The Geert Hofstede site offers a wonderful source of information for people who are interested in understanding different cultures in the workplace and/ or for those who work internationally.  It is also a wonderful place to learn more about the Australian culture. You can even compare countries in different core areas. For example Australia is a very Masculine culture, in contrast to Sweden which is considered a feminine culture. Visit the Tools area of the site to compare countries and learn more about culture and strategy.

Australia scores 61 on this dimension and is considered a “Masculine” society.  Behavior in school, work, and play are based on the shared values that people should “strive to be the best they can be” and that “the winner takes all”. Australians are proud of their successes and achievements in life, and it offers a basis for hiring and promotion decisions in the workplace. Conflicts are resolved at the individual level and the goal is to win.

Sweden scores 5 on this dimension and is therefore a Feminine society. In Feminine countries it is important to keep the life/work balance and you make sure that all are included. An effective manager is supportive to his/her people, and decision making is achieved through involvement. Managers strive for consensus and people value equality, solidarity and quality in their working lives. Conflicts are resolved by compromise and negotiation and Swedes are known for their long discussions until consensus has been reached. Incentives such as free time and flexible work hours and place are favoured. The whole culture is based around ‘lagom’, which means something like not too much, not too little, not too noticeable, everything in moderation. Lagom ensures that everybody has enough and nobody goes without. Lagom is enforced in society by “Jante Law” which should keep people “in place” at all times. It is a fictional law and a Scandinavian concept which counsels people not to boast or try to lift themselves above others.